How Much Snow Can A Roof Hold?

Unusual amounts of snow lead to many things—stalled cars, snowball fights, and airport closings. They also lead to many homeowner concerns over the roof’s ability to hold the weight. Find out what you can do to identify or prevent problems. 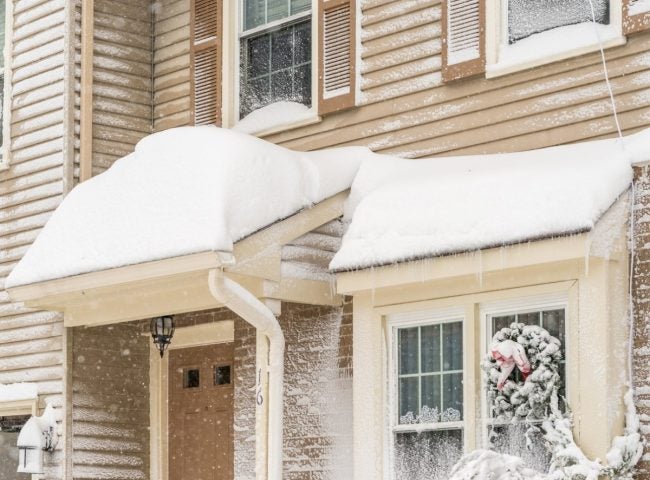 When weather stations predict frigid temperatures and record snowfall, concerns rise that roofs may not make it the full season but instead collapse under the strain of a surprising snow load. If it’s your first winter with your current roof (new or old), you may be trying to assess the situation for the season. How much snow can a roof hold, anyway? And are there steps you can take to avoid a worst-case scenario?

How much snow a roof can hold depends on the type of snow, roofline, and material, among other considerations.

These questions aren’t quite so easy to answer, because there are several variables at play. At the top of the list are the following:

Ultimately, what amounts to a dangerous accumulation of snow on one roof would be just fine on another roof down the block. If you’ve had a new roof installed during your time of ownership, consult the supplier and/or roofing contractors who did the work to get a professional opinion. If not, you may wish to schedule a roof inspection to ascertain more detail on the condition of your roof.

Look for the warning signs of a weak roof.

While you can draw some conclusions by looking at your roof from the curb, it’s indoors where you’ll find the most instructive clues to a potential problem. Head up to the attic and examine the rafters for any noticeable bends or cracks. If you find anything that gives you pause, bear in mind that it’s not necessarily (and most likely isn’t) a sign of impending roof collapse. There are many possible explanations for damaged rafters—for example, termites. And even if snow is to blame, you may be looking at damage from a previous winter. In any case, ask a licensed structural engineer to evaluate the problem promptly.

Elsewhere—particularly on the upper floors, toward the middle of the house—keep an eye out for new cracks in the drywall or plaster surrounding interior door frames. If those doors are suddenly sticking when they used to open and shut with ease, this could be an indication that the frame of your house has shifted due to a structural issue. Again, wall cracks and sticking doors are not causes for panic; rather, they are reasons to seek out the advice of a licensed professional. 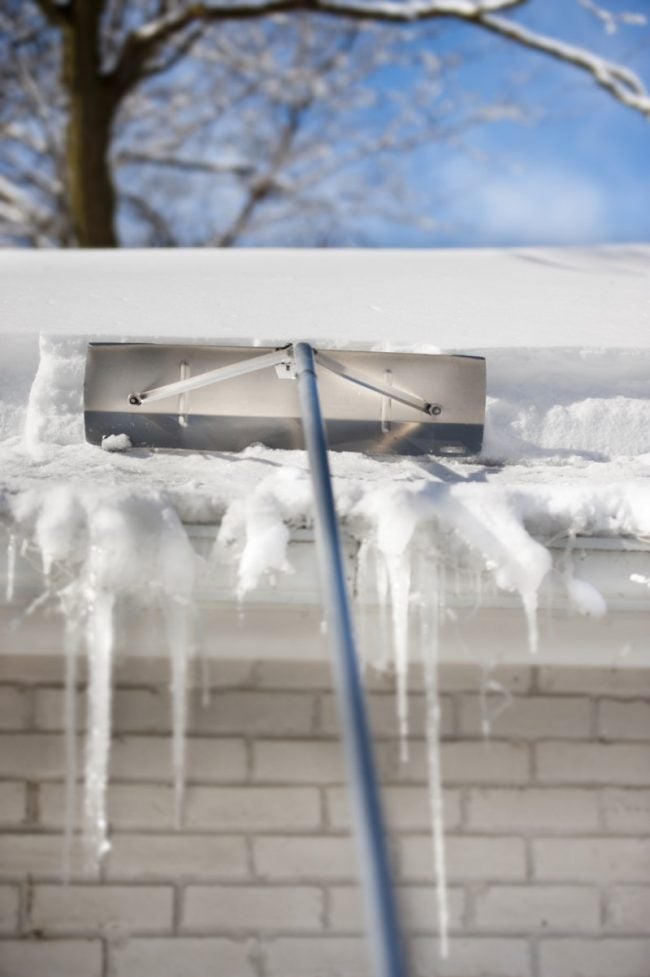 Removing snow periodically is optional and should only be attempted with extreme caution.

Some experts maintain that it’s unnecessary to remove snow from the roof, because any home built to the standards of the local building codes should be structurally equipped to handle virtually any snow load. Still, many homeowners wish to take every available precautionary step and shovel snow off of the roofline before it piles up. Not only will this prevent a large load on your roof, but it will also minimize risk of ice dams. These blocks of ice occur when the warm air inside an attic transfers through the roof and melts the layer of snow, which runs to the edge of the roof and refreezes in the gutters and at the eaves.

If you wish to follow suit, be aware that climbing up on the roof is precarious in any weather. In snow, it’s almost definitely not a wise course of action unless you absolutely know what you’re doing. For everyone else, the safest path is to hire an insured pro, someone who has not only the proper equipment but also the right experience for the job.

You can access the roof of a single-story house while keeping your feet firmly planted on the ground by using a roof rake. These effective, user-friendly tools for clearing excess snow are readily available online (see this best-selling option from Garant on Amazon that expands to about 15 feet long) and in most brick-and-mortar home improvement stores, and you might also follow the lead of some clever DIYers and make your own version.

Before you start raking away, take heed of these important points:

Bobvila.com may earn revenue from the products available on this page and participate in affiliate programs.

Give us a call today!

Reach out to us now!
By A&B Exteriors|2023-01-03T17:47:19+00:00January 3rd, 2023|
Page load link
We use cookies on our website to give you the most relevant experience by remembering your preferences and repeat visits. By clicking “Accept”, you consent to the use of ALL the cookies.
Do not sell my personal information.
Cookie SettingsAccept
Manage consent

This website uses cookies to improve your experience while you navigate through the website. Out of these, the cookies that are categorized as necessary are stored on your browser as they are essential for the working of basic functionalities of the website. We also use third-party cookies that help us analyze and understand how you use this website. These cookies will be stored in your browser only with your consent. You also have the option to opt-out of these cookies. But opting out of some of these cookies may affect your browsing experience.
Necessary Always Enabled
Necessary cookies are absolutely essential for the website to function properly. These cookies ensure basic functionalities and security features of the website, anonymously.
Functional
Functional cookies help to perform certain functionalities like sharing the content of the website on social media platforms, collect feedbacks, and other third-party features.
Performance
Performance cookies are used to understand and analyze the key performance indexes of the website which helps in delivering a better user experience for the visitors.
Analytics
Analytical cookies are used to understand how visitors interact with the website. These cookies help provide information on metrics the number of visitors, bounce rate, traffic source, etc.
Advertisement
Advertisement cookies are used to provide visitors with relevant ads and marketing campaigns. These cookies track visitors across websites and collect information to provide customized ads.
Others
Other uncategorized cookies are those that are being analyzed and have not been classified into a category as yet.
SAVE & ACCEPT
Go to Top